← Biggest Regret? My Silences.
My Story of Sex-Positivity →

What Does Wonder Woman’s World Without Men Mean? 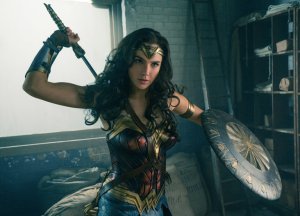 “She’s so strong,” the little girl seated next to me at a Brooklyn screening of “Wonder Woman” kept repeating to her mother…

Legions of women I know took daughters, nieces, nephews, mentees or simply went in droves, some of them to women-only screenings — and walked out of theaters with a strange feeling of ferociousness.

So says Jessica Bennett of the New York Times.

I had thought Wonder Woman was just another action flick. But there is so much more.

Men and Ares, god of war

Diana Prince (Wonder Woman) was raised among Amazons who lived on a paradisiacal island, sans men.

A Paradise without men?

Men aren’t bad. In the current film Allied spy Steve Trevor is a good guy. The screenplay, the comics, and Wonder Woman, herself, were all conceived by men. They can’t be all bad 🙂

So what must this manless Shangri-La represent?

According to legend Zeus created Diana to defeat Ares, god of war.

Symbol of Ares, god of war, and symbol of Men

Our symbol for “man” is the symbol for Ares. And Diana Prince was named for the goddess Diana, a protector of women.

Perhaps this set up represents domination culture versus partnership culture.

The modern legend of Wonder Woman was born of World War II. Nazi Germany was all about domination: whites over people of color, “Aryan” whites over other whites, straight over gay, abled over disabled, men over women… Germany’s dominance over other nations was meant to create this new world.

Some renditions find Diana leaving the Amazons to enter not the world of men, but the Patriarch’s World — where she is charged with bringing peace.

Wonder Woman is not about women defeating and dominating men. She is about uniting us.

Unlike most superheroes she’s not trying to work out a Messiah complex, she just wants to function freely in the world and to help out, as one film reviewer pointed out. It’s more “power with” than “power over.”

Diana is a peace-lover who fights when she must. She is both muscular and graceful. She is powerful and strong-willed but also nurturing and compassionate.

Wonder Woman is in touch with her whole humanity. She is a whole person.

And that’s what makes her so wonder-ful.

Posted on June 9, 2017, in feminism and tagged partnership versus domination cultures, What Does Wonder Woman’s Amazon World Without Men Mean?, Wonder Woman. Bookmark the permalink. 83 Comments.

← Biggest Regret? My Silences.
My Story of Sex-Positivity →