← What’s Wrong With Objectification?
How To Fight ISIL →

Terrorists Feeling — Not BEING — Powerful

John Oliver on terrorists in France

But it’s an illusion.

After weeks of havoc directed at Paris, Russia, Lebanon … and more … what have they got?

Nothing that your average American mass murderer doesn’t accomplish every few months.

A bunch of dead people, anger, frustration … and headlines.

And it accomplishes nothing.

There’s a big difference between feeling powerful and being powerful. The terrorist attacks probably make ISIL feel powerful. But what did they get?

Foot soldiers killing themselves to feed the egos of men higher up in the hierarchy — who eventually also end up dead.

That’s right, the suicide bombers are dead… the so-called “mastermind” is dead… Osama bin Laden is dead… Jihadi John is dead… It’s hard to be powerful when you’re dead.

Killing hundreds and grabbing headlines is what you do when you DON’T HAVE power.

Fear is only potent if people do what you want because they are afraid.

But is anyone now fearfully working to accomplish ISIL’s goals?

Terrorists only have the power we give them.

And no one has to give them any.

In the immortal words of John Oliver:

Nothing that these assholes are trying to do is going to work.

If you’re in a war of culture and lifestyle with France, good f*cking luck.

You’ve just brought a philosophy of rigorous self-abnegation to a pastry fight, my friends. You are f*cked! 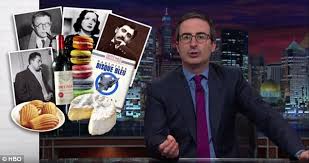 ← What’s Wrong With Objectification?
How To Fight ISIL →