← Teen Cougars at Prom
Guys Are Getting More Romantic → 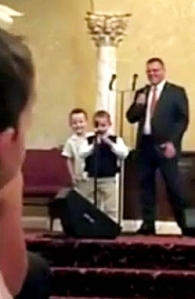 A North Carolina pastor sternly warned against the danger of “butch” daughters, while advising dads to beat the gay out of their sons, literally:

The second you see your son dropping the limp wrist, you walk over there and crack that wrist. Man up! Give him a good punch.

Another pastor from the same state who, “Ain’t gonna vote for no homosexual-lover” (Obama?) has a plan to put queer folk behind an electric fence until they die out — all to keep them from reproducing any more gays and lesbians.

Meanwhile, a toddler sings, “Ain’t No Homo Gonna Make It To Heaven” to wild applause from his Indiana congregation.

No surprise, then, that gays are persistently tormented and too often commit suicide. In fact, suicide rates are highest in conservative “values voters” states where hatred is preached over the bully pulpit.

What other source of homophobia is there but six verses in the Bible? When Bible literalists preach that LGBT people are going to hell they become Christian terrorists. They use fear as their weapon, like all terrorists.

Against this, the story of the Good Samaritan rings ironic.

The parable tells of a man who is beaten, robbed, and left for dead. Religious leaders pass him by, but finally a Samaritan comes to his aid.

The moral is generally said to be “aid one another” or “judge people by their hearts and works, not by their religious rank.”

But why would a Master Teacher like Jesus construct a story relaying the obvious?

Jesus’ parables more often shocked audiences into thinking in entirely new ways. Keep in mind that Jesus constantly urged his hearers to see the worth and dignity of all, no matter how loathed — including Samaritans, who were despised. So consider this perspective which I’ve altered from a blog post written by a pro-gay rights Mormon (!!)

Imagine Jesus telling a story that forces you to think the unthinkable — to string together words that simply do not belong together: “good” and “[insert epithet of choice].” If we want to understand how Jesus’ words invaded and overthrew the pious and staid beliefs of his hearers, we might imagine him telling a Christian congregation in North Carolina or Indiana the parable of the Good Gay Man who stopped to help a victim near death after a Catholic Bishop, a Rabbi, and a Christian Pastor first passed him by.

The moral of the Good Samaritan? Love gays, and anyone else whose humanity is not fully appreciated.

← Teen Cougars at Prom
Guys Are Getting More Romantic →