← Vibrators Were Invented to Cure Hysteria
My Son Likes Girl Stuff. Is He Gay? →

From time to time men’s magazines exalt body types that vary from the tall, skinny, buxom shape they typically flaunt. True, the lovely ladies on Maxim’s and FHM’s “Hot 100” lists look pretty much the same, but it’s nice to see a little branching out now and again, so let’s celebrate what we can.

While buxom breasts are a highly appreciated part of the female form, Mila Kunis was just named #3 on Maxim’s Hot 100, which considers their picks “the definitive list” of the world’s most beautiful women. Mila also made #9 on FHM where male readers vote for their faves. Also on that list are Kristin Stewart, Paris Hilton, Pippa and her sister Kate Middleton, the Duchess of Cambridge. And Keira Knightly once made FHM’s #1 hottest hottie.

Slim figures are also admired, but Kim Kardashian, along with Scarlett Johansson and pear-shaped Jennifer Lopez, made FHM’s top 100 this year. And, Christina Hendricks, “Joan” of Mad Men, was picked as a “Girls We Love” covergirl.

When women see men gaping in appreciation of Joan’s full figure, I’m sure they are better 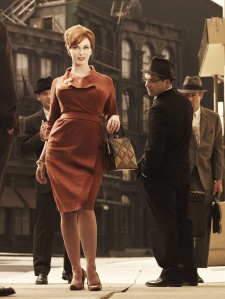 able to appreciate their own curves. And when Mila Kunis asked Justin Timberlake if her breasts were too small in “Friends With Benefits,” I’m sure plenty of women were happy to hear him respond, “They’re breasts, aren’t they?” No problem. And then he falls in love.

Opening up the ideal is good for both women and men, even if there is still far to go.

When a woman sees herself as beautiful her self-esteem rises. It’s also easier to feel sexy. And when she feels sexier her interest in sex rises, too. She isn’t distracted, wondering if she’s attractive enough. And, women tend to get aroused by feeling that their partners see them as alluring. Plus, when men see that the ladies they love resemble Maxim’s Top 100 in some way, they can more easily see the beauty of their partners.

I suspect most women overestimate how harshly men see them and I suspect that most men are more accepting of women’s bodies than women are, themselves. So that’s good news ladies.

Our society’s ideals don’t have to determine our self-esteem, but they usually play a heavy role both in how we see ourselves and in how others see us. And so while we can work to move beyond the superficial, we’d all benefit if our culture expanded its notions of beauty, too.

← Vibrators Were Invented to Cure Hysteria
My Son Likes Girl Stuff. Is He Gay? →