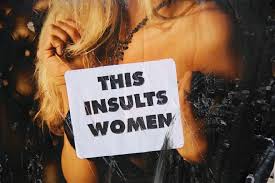 Why should women put up with insults?

And women shouldn’t complain — because they might offend someone.

Not all rap is sexist. But when I talk about sexism in gangsta’ rap some of my students start squirming.

They defend the lyrics.

Actually, they don’t do that much anymore because I’ve started asking these questions before I begin this lecture:

Why is sexism more invisible?

The student reaction reminds me of a man who once told me that I can’t complain about sexism in fraternities because some frat brothers are Black. So my complaints about sexism would be racist.

Sometimes sexism seems to be more acceptable than criticizing it.

Why are we more sensitive to ethnicity than gender? Probably because ethnic minorities have a memory of a world without racism.

But women have no memory of a world without sexism. They are often surprised by evidence that the world hasn’t always been male dominant.

Women are so used to sexism that it feels natural, normal, invisible…

Why are women less united in speaking out on gender issues?

There’s a tumbler showcasing women holding signs saying, “I’m not a feminist because…” (I like men… feminists want special treatment…)

Can you imagine a tumbler featuring people of color holding signs saying, “I’m not against racism because…” (I like whites… ethnic minorities want special treatment…)

Maybe that’s because most women expect to have male lovers and partners, half of their parents are male — as are half of their children and siblings. With these close relationships women fear that complaining about sexism might offend men.

Plus, we routinely eroticize violence and domination of women. We don’t do the same with ethnic minorities. (Imagine: whites, male and female, routinely dominate people of color — and it’s so sexy.) When you grow up seeing that stuff in mainstream culture, sexism can start to seem sexy, appealing. Not something to stop.

Which is worse: insulting? Or complaining about being insulted?

My measuring stick for “wrongness” is this: where is more harm done?

Which is worse, insulting someone? Or saying that you don’t like being insulted?

But it’s not about me. (It probably is.)

Some women will say:

But it’s not about me…

And they act like hoes, so they deserve it!

So, if someone else — not you — is the target of insult that’s okay?

And they deserve it?

And why are men celebrated for having sex with lots of women, but women are dirty hoes if you turn it around?

And even if you think it’s not about you, it probably is. Because insults are almost always used to put someone else down in order to raise yourself up. If you routinely call women hoes and bitches, you can feel like you are better than half of humanity — a little more than half, actually.

Meanwhile, the world around us subconsciously gets into our heads. No wonder women are routinely called bitches and hoes on high school and college campuses these days.

Yet women don’t complain about it much. They hear these words so often that it starts to feel natural and normal. They grow used to being demeaned.

And then they don’t just put up with it, they defend it.