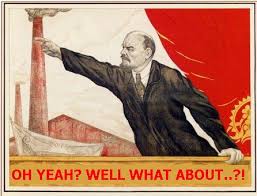 Is America morphing into Soviet-style “what aboutism”?

Is America losing its moral grounding?

Is there no longer any difference between US and Soviet-style morality?

What, you think our country’s so innocent?

Masha Gessen immigrated here from the former Soviet Union and worries that “what aboutism” creates a false moral equivalency, as she wrote in the New York Times.

“What aboutism” resonates with Soviet-style propaganda: When accused of anything just say that your opponent is not pure. “But what about them…?”

Everyone does it. There is no moral ground. Just winners and losers.

Winners and losers — a Trumpian mindset.

But “winners and losers” leads us away from moral behavior and into “Might makes right.”

Ken Wilber is a philosopher who studies societal evolution. Turns out that both individuals and societies evolve over time. But some people and cultures get stuck in the early stages.

At the earliest phase we are egocentric. It’s all about me. I seek reward. I avoid punishment. Toddlers and early societies are all about themselves. And ruled by people who believe might makes right.

Trump certainly fits the egocentric mindset. I don’t know that he ever does anything to benefit anyone but himself.

At the next stage we gain the capacity to think in global and “universal” ways. This stage began with the Renaissance and grew with the Enlightenment. The view is rational and grounded in reason and science. Its focus is progress and achievement.

At the next stage we grow inclusive and caring toward one another and the earth. Relationships, harmony and dialogue are key values. All cultures are equal. This is a partnership mindset.

Wilbur describes each of these stages as “the flatlands” because if you are in any of these stages you cannot understand — or you reject — most everything about the other levels outright.

Next up is the integral stage from whence we can see some value in each of the other stages and utilize that which is positive while letting go of the negative. Flexibility and functionality are high priorities. Equality is complemented with awareness of degrees of excellence where appropriate. And morality is not entirely relative, but based on a question of harm.

Many of us worry that America is devolving.

And we reject the notion that morality is relative. If you harm someone — kill them for reasons other than self-defense, or cripple them physically, mentally or emotionally — that is wrong, regardless of culture.

All killing is not equal. If you kill a political enemy, that is much worse than fighting to defend your country or allies against fascism or genocide, for instance.

We can behave morally

Ms. Gessen worries that one of the norms DJT has attacked since taking office is our striving to act in line with our moral values — to be better.