Don’t Reject Your Culture, Even When It Mutilates You

With recent new good news, I’m updating a past post and expressing my thanks, first, that only a very small part of the world lives under the Taliban, and second, that a young girl now has a new nose.

The August 9, 2010 cover of Time shocked the world as an 18 year old Afghani named Aisha gazed from behind her mutilated nose. Punishment for running away from home. Aisha had run away because she feared she would die from her in-laws’ abuse.

Eventually discovered, a Taliban-run court ordered her nose and ears be cut off, declaring she must be made an example. This was effectively a death sentence, since it was assumed she would bleed to death.

A death sentence? For running away? From people who might kill you?

Her husband took her to a mountain clearing where he slashed Aisha and left her to die.

Yet she lived. After passing out from pain, she eventually awoke, choking on her own blood. Then Aisha summoned her strength and crawled to her grandfather’s house. Fortunately, her father managed to get her to an American medical facility.

Alive but disfigured, sympathy arose around the world, and the non-profit Grossman Burn Center in California has now fitted her with a prosthetic nose. They are hoping to eventually do reconstructive surgery. 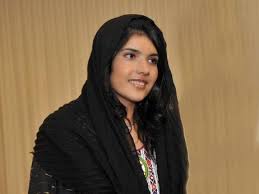 The Taliban tell their people that women’s rights are a Western concept that breaks away from Islamic teaching. But the Quran says nothing of cutting away ears and noses, and leaving girls and women to die. Early Islam actually had a feminist air.

I’ve often thought that if Asian women had gained the vote before their American sisters, the powers that be would warn us away from rejecting our religion and our culture.

Is it really a loss of culture or “religion” that is feared? Or do these men just worry that women might gain equal footing?

Meanwhile, beware: Don’t reject the culture that mutilates you body, mind and soul.

A version of this article was originally published August 3, 2010.

Related Posts on BroadBlogs
Did Women Create Burqa Culture?     Early Islam’s Feminist Air
Cultural Relativism: Must We Be Nazis to Criticize Them?