← Women, Men and Breaking Up
Guys Are Getting More Romantic →

Supreme Court May Ok Forcing Your Religion on Others 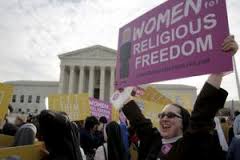 Should some people be allowed to force their religion on less powerful people?

That might happen if the Supreme Court rules against the government in the Zubik v. Burwell contraception case.

Employer health plans must provide free contraceptive coverage under the Affordable Care Act. Religions that forbid birth control are exempt. But now some seek to expand the exemption, insisting that the consciences of religiously-affiliated organizations are unduly stressed by a back door offered to them: they must notify their insurer or the government of refusal to comply, and the government will provide the contraception.

What about the religious rights of women employees? Perhaps contraception is not against their religion. Why must they be forced to adhere to the dictates of their employer’s conscience?

Should an organization’s rights trump the religious rights of individuals?

Where there is a conflict between the religious rights of an organization and an employee, the person whose body and well-being is most at stake should win out.

Look beneath the covers and this is really a question of allowing some people to force their religion on others. And in a way that disempowers by giving women less control over their bodies, health, lives, livelihood and independence.

← Women, Men and Breaking Up
Guys Are Getting More Romantic →