Wealth of 1/2 US population = 20 richest people 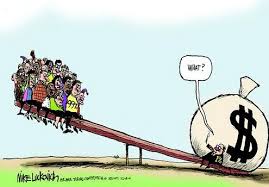 What does half of the US population have in common with the 20 richest people?

They hold the same amount of wealth.

We all know that wealth is unequally distributed in the US. But, the results of a new study by the Institute for Policy Studies, authored by Chuck Collins and Josh Hoxie, are still eye popping.

Moving up the wealth ladder, they calculate that the top 400 people—yes, people not households, each with a net worth starting at $1.7 billion, have more wealth than the bottom 61 percent of the US population, an estimated 70 million households or 194 million people.

Finally, we get to the top 20 people, those sitting at the pinnacle of the US wealth distribution. As the authors explain:

Although obvious, it is still worth emphasizing, as Collins and Hoxie do, that great wealth translates into great power, the power to shape economic policies. And, in a self-reinforcing cycle, the resulting policies, by design, create new opportunities for the wealthy to capture more wealth. Think: free trade agreements, privatization policies, tax policy, and labor and environmental laws and regulations.

They are overwhelmingly white, rich, older and male . . . . Across a sprawling country, they reside in an archipelago of wealth, exclusive neighborhoods dotting a handful of cities and towns… Now they are deploying their vast wealth in the political arena, providing almost half of all the seed money raised to support Democratic and Republican presidential candidates. Just 158 families, along with companies they own or control, contributed $176 million in the first phase of the campaign, a New York Times investigation found (emphasis added).

And yet, one still hears some people say that class analysis has no role to play in explaining the dynamics of the US political economy. Makes you wonder who pays their salary.

Originally posted at Reports from the Economic Front, and reposted @ Sociological Images

Martin Hart-Landsberg is a professor of economics at Lewis and Clark College. You can follow him at Reports from the Economic Front.