Katniss: Bringing Back the Goddess 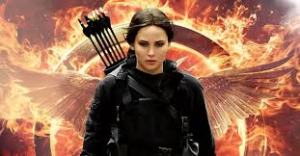 Katniss, bringing back the Goddess

A modern-day Artemis, Athena, and Persephone, The Hunger Games’ Katniss is bringing back the goddess.

With her dark hair and olive skin (as described in the book) she physically resembles Greek deity.

And she reflects them:

Artemis (Roman: Diana) is the goddess of nature and the hunt. She is great with a bow and arrow, which makes her self-sufficient, adventurous and leaves her spending a lot of her time in solitude. But she also spends a lot of time with other women, and is a protector of them.

Artemis, Goddess of the Hunt

Katniss is also great with a bow and arrow, and favors the color green because of her love of forests. Like Artemis, she is quiet, independent and fierce.

When we meet Katniss, she is living with women: her mother and younger sister, since her father died in a mining accident. Some suggest that most of her emotionally deep on-screen moments are with women.

She is also a protector of her sister and nurtures those who need her.

Persephone is a sensitive and empathic healer who moves into the Underworld – not by choice — where she faces her shadow side and learns.

Katniss is also plunged into a dark underworld, where she shows sensitivity and empathy. And she grows. In a fight of all against all she learns to support others — and encourages them to do the same. She comes face-to-face with her own desire for revenge but eventually works to stop the awful cycle of violence.

Athena is the strong-willed goddess of wisdom and war.

Katniss becomes much the same over the course of her adventure. One critic describes her as having:

evolved from a backwoods scrapper in the first movie into a battle-scarred champion and an exemplar of female power… she has returned as destined to finish the fight, defeat the enemy.

Citizens, inspired by Katniss’ spirit, begin to rise up against their oppressors. And Katniss rises to her calling for leadership, growing exponentially.

In the end, she holds onto her wisdom and humanity in the midst of war.