Stop the war on women!

The disturbing Handmaid’s Tale (Hulu April 26) hinges on misogyny and controlling women and their bodies.

The main events of the tale have actually happened at some point in history, as I have written about before.

Religious fundamentalists stage a coup and establish a theocracy called Gilead — a patriarchal theocracy that forces women out of the public sphere and into their homes. Some of these women were once strident antifeminists in the pre-Gilead United States. They have more power than most women, yet have very few rights and face everyday humiliations. They were hypocritical then and they are hypocritical now — disobeying as many of their new restrictions as they can (their one good attribute).

Since environmental degradation has left most people infertile, “handmaids” are forced to mate with powerful men. They aren’t seen as people so much as vessels. So handmaids are “re-educated” to feel worthless, and always at fault. “Aunts” use tasers to make the handmaids condemn each other. Even if they are raped, its “her” fault.

Unfortunately, some of this rings true today:

The women of Gilead were made to feel like they didn’t matter.

Republicans today can make us feel the same way. Like eliminating insurance coverage that women need:

Republicans constantly fight to defund Planned Parenthood, which provides care to 1 in 5 American women. I used their services right out of college for basic healthcare when I had no insurance.

But defund it! Even though no federal money goes to abortion.

So many women can expect:

Other PP services vary from place to place but some clinics include: 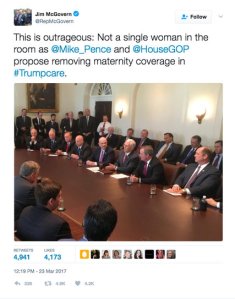 When Republicans proposed defunding women’s healthcare a photo went viral which revealed the bill’s proponents to be all white men.

I wouldn’t want to lose my mammograms! (ha ha)

Well, I think if you’re an older man, you can generally say you’re not going to need maternity care.

These sorts of images pop up so many times that Jill Filipovic at the New York Times suspects a deliberate push to disempower women with the aim of male privilege and male entitlement:

If women can’t decide for themselves when and if to have children and are instead at the mercy of men and nature, there will simply never be 50 percent of us at that table, or in any halls of power. Republican men know this as well as women do.

Apparently women and our lives are trivial. And a laughing matter.