← Men’s Pleasure Is More Important?
If Not Hillary, Who? A Libertarian? →

A Sex Object Not Enjoying Sex 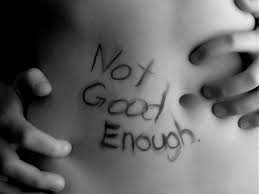 It’s not unusual these days for a young woman to become preoccupied with how attractive she looks, habitually seeing herself through her partner’s eyes, and judging herself based on what she thinks he thinks. In other words, to self-objectify.

Instead of enjoying sex.

I’ve talked with friends about the phenomenon and a couple of them have opened up and told me their stories. Like “Sophie,” who let me relate her story in my blog.

Sophie felt a little awkward recounting her experience, sometimes stumbling over her words. But she seemed to want to talk about it.

As we talked over peppermint tea, she said that before we started discussing this, she had never realized that when she was younger she had habitually worried about how she looked in bed, instead of enjoying how she felt. “No wonder it was so hard for me to ‘come’ with my boyfriends!” she exclaimed. “How could I when I was preoccupied with how I looked — and worried that I didn’t look good enough?”

Yeah, that’s pretty much the opposite of eroticism.

She went on to explain that, “In my earliest relationships, especially, I obsessed over whether my breasts were big enough. The guys always assured me that they were just fine, but,” she continued wistfully, “I wasn’t sure if they were just trying to be nice.”

Eventually she stopped asking guys that question after reading complaints in magazines. “Some guys complained that they got so distracted by the questioning that they lost interest — even though they were just fine with the women’s breasts,” she explained. “So I decided to assume they were okay unless I heard otherwise.”

She added, “Another guy in Cosmo said that men love breasts of all sizes. He had been with women who ranged from A to DD and loved them all. So that helped my confidence a bit.”

But the concern stayed at the back of her mind. “I still spent time forcing those worries to the back of my head,” she said. “I was constantly working to submerge those thoughts. So it still wasn’t easy to be completely ‘into it.’”

Sophie did have one bad experience, too: “I did have one boyfriend who treated me differently from other guys. I can’t pinpoint what it was — or at least I can’t remember now — but I was constantly wondering if he found me attractive. I’d be wondering about it when we were in bed, but also when I was alone, just driving around town… at the grocery store… at my granddad’s funeral…”

She finally decided to talk with him about it. “I told him that I hoped he didn’t compare me to Playboy-type models. I hoped that he could see what was attractive about me — attractive in my own way.

“I was so surprised by his response. He said, ‘I can’t do that.’ That didn’t make sense to me and I kept asking him questions until I finally realized that he equated big breasts with attractiveness and small breasts with unattractiveness.” Sophie paused before adding this thought, “I had just thought that he wished my breasts were bigger. It hadn’t occurred to me that he saw me as existing entirely outside the category of ‘attractive.’”

“But,” she continued, “he said it didn’t matter because he loved me. And he didn’t love other women who were more attractive than me. But I lost all interest in him after that. And he was so shocked when I broke up with him. Imagine that!”

She says that now she is lucky to be married to a man who likes small breasts. “And I believe him because one day I found what he was viewing online — they were smaller-breasted women. Actually, I have mixed feelings. I’m not thrilled that he looks at them, but the voices in my head — the ones that worry about breast size — have quieted down.”

Since around 80% of young women have poor body image, it seems likely that a lot of us have heard those voices chattering about being too small, too droopy, too lopsided, the wrong shape, or fretting over how big or small our butts, thighs or tummies are…

And in fact, two-thirds of my women students said it could be a big distraction for them.

So that’s one of the problems of objectifying women’s bodies, as women learn to do it to themselves, too. And then they lose self-esteem and don’t enjoy sex.

← Men’s Pleasure Is More Important?
If Not Hillary, Who? A Libertarian? →